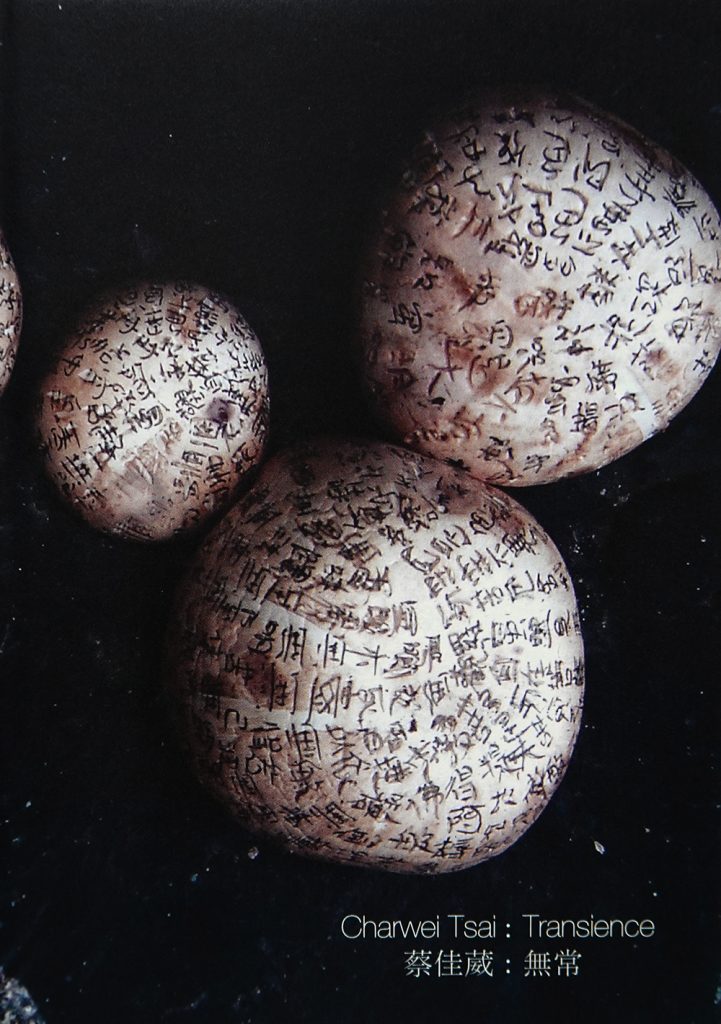 This publication was published as the catalogue to the exhibition, Charwei Tsai: Transience held at Osage Soho in 30 April to 31 May 2009.

Transience is Charwei Tsai’s first solo exhibition in Hong Kong, featuring works from 2005 to 2009. Tsai’s works engages with the transient nature of our natural and man-made environment and, in particular, seeks to ‘inspire moments of contemplation on the ephemeral qualities of our environment and history.’

Tsai’s works are influenced by tenets of Buddhist philosophy, in particular, the Heart Sutra, which draws attention to the emptiness and ephemeral nature of all phenomena. This can be seen in Mushroom Mantra (2005–2009), which was exhibited at the Centre Pompidou in Paris in 2008. Here, Tsai transcribes the Heart Sutra onto fresh mushrooms, an organic and impermanent material, thereby manifesting the transience and ephemerality posited by the sutra. As one observes the delicately hand-written characters on the slowly decaying and deteriorating fungus, the impermanence of existence is amplified and the essence of the sutra revealed. This is also further explored in the exhibition through photographs and a video installation, Fish Project (2007). In the latter, there is a different mode of engagement with the text used. In Fish Project, as with Meat Map (2008), Tsai transcribes China’s ‘One China’ policy onto a struggling fish out of water, and raw meat in the shape of the map of China, respectively. However, rather than singling out China in her critique of nationalism and the sacrifices made in its pursuit, Tsai’s use of the ‘One China’ policy is, instead, highlighted as one example out of other instances throughout human history. Echoing the contradiction found in her mantra works, the rotting meat and the dying fish becomes a powerful symbol for the essential impermanence of existence in juxtaposition to the desire for immortality through nationalism.

Be the first to review “Charwei Tsai – Transience” Cancel reply 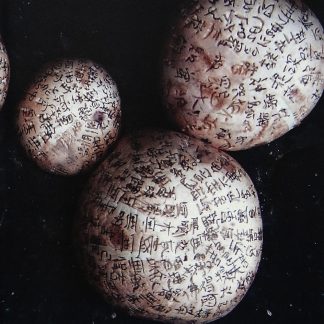