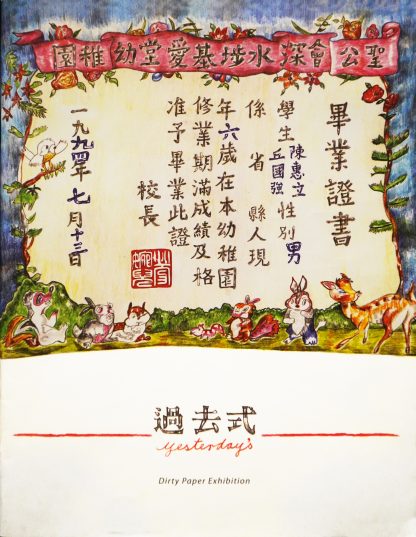 This publication was published as the catalogue to the exhibition, Dirty Paper: Yesterday’s held at Osage Kwun Tong from 7-30 September 2013.

Art collective Dirty Paper consists of Chan Wai Lap and Yau Kwok Keung. The two met in junior college when they both majored in Graphic Design. Lap went on to become a graphic designer while Keung continued his study. After several months of working, Lap determined on a full-time artistic practice and this teamed up with his old classmate. Keung and Lap started operating under the name

Dirty Paper worked mainly with recycled paper in their initial days. They wanted to capture a lost sense of unbridled creativity that we often see in young children, and adapted to use materials such as oil pastel and HB pencils. They allow the edge of their palms to smudge the drawn marks on recycled paper, forming a texture that is remindful of our early school days.

Different from previous way of coauthoring, in “Yesterday’s”, they showcases their individual works alongside their collaborative efforts, in order to demonstatrate their distinct artistic dispositions.

Dirty Paper draws upon their past experiences and creates works that speak in the language of nostalgia, reminiscence and collective memories. The two members of the group display works that illustrate their individual pasts alongside their collaborative works. Lap finds inspiration from his high school years; he was initially fascinated by school uniforms: a antiquated social device that has lost its relevance, yet nevertheless prevalent in post-colonial Hong Kong. Lap also revisits dogmas and lessons in discipline we all have encountered in high school, questioning the effectiveness of these indoctrinating decrees from a sarcastic perspective. Keung suffered the loss of his beloved pet cat, and when event took a turn for the worse he lost his digital photo library to an unexpected hard disk failure, resulting in the loss of many of his cat’s picture. Keung attempts to reverse the effect of his amnesiac mishap and in the process questions the objectivity and validity of one’s own memories.

Be the first to review “Dirty Paper” Cancel reply 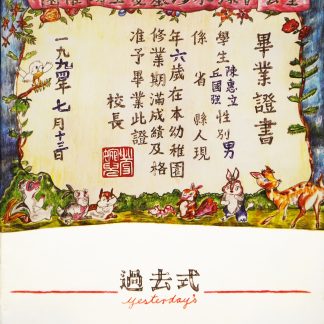