This publication was published as the catalogue to the exhibition, HKACT! Act 9 WYSIWYG by Jeffrey Shaw held at Osage Hong Kong from 12 November 2019 to 12 February 2020.

WYSIWYG is the first solo exhibition of Jeffrey Shaw in Hong Kong. Exhibiting together in London in 1966, Jeffrey Shaw and Tjebbe van Tijen announced: This is NO THING. This is a SITUATION OF OPPORTUNITY. From that time onwards throughout his career, Shaw has focused his artistic research on creating situations of viewer engagement rather than on object making. His pioneering introduction of ‘interactivity’ into the language of contemporary art made personal discovery and the WYSIWYG experience the cornerstones of his philosophy of art’s present and future operational value.

This exhibition at Osage of works that Shaw and Agnes Lin (Osage) have selected draws upon over fifty years of his practice. Together, it provides a rare opportunity to experience an overview and insight into the core technical, aesthetic and conceptual themes that have preoccupied his creative research. These include public participation and interaction, expanded cinema and immersive visualization, the aesthetics of navigable representations and emergent narrative, new media and computational techniques and virtual and augmented reality. This practice has often involved the development of new types of optical/mechanical apparatus which are both platforms for and expressions of the underlying aesthetic and conceptual aspirations in Shaw’s work.

Shaw has led the revolution in art whereby spectators became principal actors in immersive spaces of representation along the borders of the virtual and the real. The Osage exhibition presents a juxtaposition of Shaw’s most important recent works, reconfigurations of his landmark older works as well as some intriguing artifacts from his archive, thereby making it a fascinating exploratory journey for the audience moving from the past to the present and back again.

A distinctive aspect of Shaw’s practice is his deep-going co-operation with other artists, writers, composers, photographers and engineers. Shaw’s practice is also linked to the history of his foundational institutional and academic achievements (APG London; Eventstructure Research Group Amsterdam; ZKM Karlsruhe; iCinema UNSW Australia; School of Creative Media City at the University Hong Kong) that have made his pioneering research, as well as curatorial activities, so influential on artists, scholars and students internationally. In Peter Weibel’s words “… his works co-created, co-constructed the genre, gave it its initial contours. Without Shaw’s output we would be unaware of the full range of electronic media art.”

WYSIWYG presents milestone works that are hallmarks of Jeffrey Shaw’s singular achievements in the avantgarde of contemporary media art. The computing acronym WYSIWYG – what you see is what you get – was chosen by Shaw as the title for his solo exhibition because it invokes the experience gained from the viewer’s action of interactively exploring his artworks. In this most fundamental aspect of Shaw’s oeuvre, the exposition his art is determined by what happens in the course of an exchange, and what is seen and percieved is what is performed and elucidated by each individual viewer/interactor. So one can add this preface to WYSIWYG: WYDIWYS – what you do is what you see!

Be the first to review “Jeffery Shaw: WYSIWYG” Cancel reply 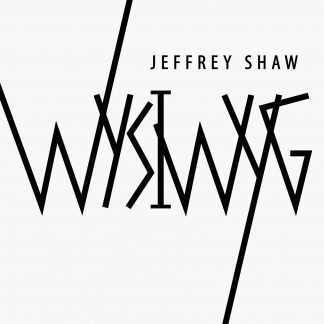